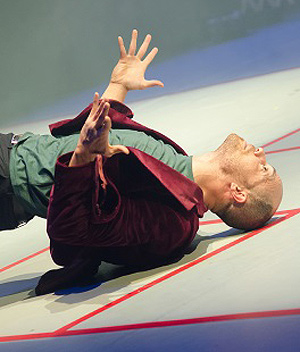 Two dance-powered performances in one evening at the larger of the Traverse’s performance spaces. Professionalism was shown from the off and the hearty yet spaced out audience were left satisfied.

The first performance was a solo piece which was choreographed and performed by Tony Mills. A well thought out story of modern life and sacrifice started with collected, well known sound clips with quotes on how one is expected to effortlessly live rich in western society. It wasn’t long until the confident performer showed his bare muscly frame to the audience, some were particularly grateful – some jealous.

A turn of direction was in store for the soundtrack as Mills danced to classical number, showing great balance, timing and skill. The personality of the character he created came across using facial expressions in a clever way as the theme of the show was clear. A ‘where am I going self-reflection’.

The stage directions and props were superb with Mills creating enough humour to sympathise with the dark story. A notable point was when he juggled on a balancing plank of wood then only a minute later to be acrobatically leaping round the large stage. To quote the script “as people, we do too much”. Tony Mills certainly took on many skills and broad themes in this production, showing he can pull his weight on one of Scotland’s most respected stages.

After the interval, the second dance production of the evening commenced. A dance duo performance called Box Fresh greeted us with a livelier and and more humorous piece. Yet again, the soundtrack mixed from orthodox to contemporary with Daniel Lowenstein and Olleg Kiricenko showing wonderful comedy chemistry without speech that could be compared to early Laurel and Hardy at times. One strong and loud, the other slimmer, yet quietly confident.

The lads graced the stage in all black clothes clashing with red suede Puma trainers which looked fantastic under the stage lights. Both performing rhythmic dancing in where they competed for the audience’s attention which was funny and was greeted with laughter. In an outfit change to dinner jackets and bare feet, we saw a more orthodox form of dance with Lowenstein and Kiricenko showing a sensual partnership also.

The highlight of the performance was the grand finale, leaving the stage covered in red clown’s noses and a skit of flopping like fish. All in all, a varied evening. THREE STARS